The festival dedicated to Ernest Hemingway, called “Hemingway, the Nobel Prize Winner in the Lagoon of Caorle” is a journey of discovery of the American journalist and writer who was guest, for long years, of the Baron Raimondo Nanuk Franchetti in the lagoon of Caorle, a paradise he described in the book Across the River and Into the Trees. During this journey, not only will the Papa Journalism Award – Ernest Hemingway and the City of Caorle Prize be assigned to those who enhanced and supported culture with their knowledge, but the birth of Ernest Hemingway (21 July 1899) will also be celebrated.

The events will take place in the main locations of the Caorle lagoon, such as Valle San Gaetano, where every year the Poja Family opens Hemingway’s Hunting Lodge for the Papa Award, but also historical locations like Vescovado square and Lido Altanea, a tourist area surrounded by the nature of a region full of history and traditions. The crossing of the lagoon on the motor vessel “Arcobaleno” is particularly suggestive, leading visitors to discover the typical old fishing houses called “casoni” (“big houses”).

The event held in Caorle, at its 8th edition, is internationally renown and hosts personalities of the journalistic, academic and literary world. Many famous faces of journalism have chosen the Papa Award for the promotion of their books.

Other public figures who arrived on the island are Fernando Proce (eclectic host of the RTL 102.5 radio show La famiglia giù al nord (“the family down north”), along with the American journalist Jennifer Pressman and the journalist Fabio Carini, patron of Cuffie d’Oro Radio Awards, the prestigious communication prize created with Charlie Gnocchi, awarded to the Papa Award in 2015 at the Open Plaza of Expo Milano 2015.

The event in Caorle also hosted Giandomenico Cortese, editor of Hemingway and the Great War, and Alberto Luca, President of the Luca Foundation. But the language of food and music were also protagonists of the week dedicated to Hemingway and “coloured” the midsummer event. The melodies played by Irene Pauletto and Anna Possamai, young harpists of the Music School Santa Cecilia of Portogruaro (Venice), paid tribute to Ernest Hemingway in the anniversary of his birth. That day, in collaboration with the Benetton Study and Research Foundation, the Corriere della Sera Foundation and Michele Concina (heir of Fernanda Pivano, historic translator of Ernest Hemingway’s works), the public could listen to a digitalised version of a recorded transcontinental phone call made by Hemingway and Pivano back in 1957. The listening was not only exclusive, but also particularly touching for those who had the pleasure and the privilege to take part to the events dedicated to the American writer in Caorle.

The Papa Award is therefore a fast track to talk about the intense and lasting relationship of Ernest Hemingway with the island of Caorle, which emphasises, during the days dedicated to the writer, its distinctiveness of old fisher village. As a matter of fact, the sea and the lagoon, much beloved by Hemingway, are the beating heart of an island that means to consolidate its tie with the history of the 20th century, which found in men like Ernest Hemingway, Lino Benatelli (known as Nino Beo) and Baron Raimondo Nanuk Franchetti some of its protagonists.

The 2018 edition included dozens of events over six days of conferences, book presentations, workshops, exhibitions, excursions and documentaries, with more than 80 guests from different countries of the world; the entrance was always free and there were a few live streaming events. Among the guests there was the RAI journalist Tiziana Ferrario, a living symbol of the battles against stereotypes and preconceptions about women. She has turned the spotlight on all the women in the world who speak up to ask for the same career opportunities and rights as men. A female anger that culminated in the Women’s March in Washington the day after the inauguration of Donald Trump at the White House – an event Tiziana Ferrario reported with impeccable professionalism as head of the correspondence department at RAI from the US.

Others were Alessandro Barbano, publisher of Il Mattino of Naples, Maria Cuffaro, journalist and correspondent for the RAI news program TG3, the Pulitzer prize winner journalist Alessia Cerantola, the RAI correspondent from Berlin Barbara Gruden, Maurizio Piccirilli, who took the picture of the founding of Aldo Moro’s corpse in the back of the red R4 left by the Red Brigades in Via Caetani in Rome, Filippo Boni, author of the book Gli eroi di Via Fani [“the heroes of Via Fani”] and Floriana Buflon, who won the Lucchetta Prize with her report about foreign minors abandoned and abused in the area of the Termini train station in Rome, published by Espresso.it and broadcast by La7 and RaiNews24.

The island also hosted Andrea Iacomini (UNICEF spokesman), Gian Carlo Murkovich (President of the Chambers of Commerce for Central Europe), Marco De Amicis (Save the Children), the De Telegraaf correspondent Maarten van Aalderen and the Associated Press correspondent Collen Barry, as well as the journalist of Il Sole 24 Ore Gerardo Pelosi and Giuseppe Gioia, (Veneto Association of Journalists). And there were more guests at the Hemingway festival promoted by the nonprofit cultural association Cinzia Vitale ONLUS (www.vitaleonlus.it) in partnership with the city of Caorle and with the patronage of the Veneto Region. The north-eastern daily newspaper Il Gazzettino was media partner. The Papa Award had a special guest: Oleg Mandic, the last child who left Auschwitz alive. He talked about his life in the concentration camp, a story that found a few similarities with that of the Syrian journalist Asmae Dachan, who has been collecting the voices of her war-fleeing fellow countrypepole for years, engaging herself in the front line in the defense of human rights. The city also hosted Angelo Cimarosti, co-founder of the citizen journalism website YouReporter.

The closing night of the 2018 edition saw the presentation of the book Strange Tribe by John Hemingway, grandson of Ernest, with an introduction by Roberto Vitale, President of the Papa Award, and translated into Italian by Maria Grazia Nicolosi. The book was discussed by the publisher Sante Avagliano (Marlin Editore) along with Collen Barry, journalist of the Associated Press (USA), commenting on John Hemingway’s videocall from Montreal. In addition, there were many historical voices, e.g. Rosella Mamoli Zorzi, Professor emeritus at Ca’ Foscari University in Venice, Sergio Tazzer, President of the Center for World War I historical documents and Barbara De Nardi, city councillor for the World War I centenary of the municipality of Vittorio Veneto. For the first time, the festival hosted the Vice Director of the Italian Associated Press Agency (ANSA) Stefano Polli, Father Enzo Fortunato, Director of the newsroom of the Sacro Convento of Assisi with his book Francesco il ribelle [“Francis the rebel”] and Martina Pastorelli, co-founder of Catholic Voices Italia.

CITTÀ DI CAORLE PRIZE
The City of Caorle Prize is combined with the Papa Award and is given every year from the municipality to those who have promoted and supported culture with their knowledge. In 2018 the distinction went to Lucio Caracciolo, a highly experienced journalist and publisher of Limes, who is also one of the most important geopolitical experts at the international level. In 2017 the prize was awarded to Tiziana Ferrario, head of the correspondence department at RAI (the Italian public broadcasting company) in New York. The winner was Andrea Iacomini, spokesman of UNICEF Italia, in 2016 and Roberto Papetti, publisher of Il Gazzettino, in 2015.

«The days dedicated to Ernest Hemingway give us the opportunity to immerse ourselves in our history, to breathe our own traditions and live again part of our past. The American writer was deeply fascinated by the beauties of our land, where he took refuge every time he could: here he had found a lagoon in which silence and passion were intertwined in a way that made him live the magical experiences he decided to recall in the book Across the River and Into the Trees. Therefore, the City of Caorle Prize is meant to be a seal of continuity between history and the work of those who promote the value of knowledge, of any expression of culture». 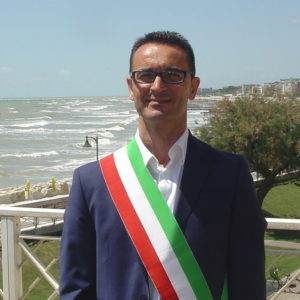 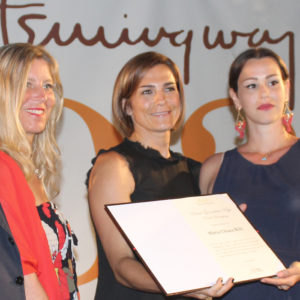 «The Papa Award is the most representative event of the essence of Caorle: the passionate paths of the heart that follow the writer for all his life are rediscovered thanks to the annual week dedicated to the one of world’s most important literary icons of all times. The emotions that these places have been able to stir in the American writer, who found in Caorle his town of adoption, still live in his books, enriched with the charm of “his” language. With the City of Caorle Prize and the Papa Award, the local administration wants to draw attention to those who work to strengthen the fundamental values of multi-culture».

The City of Caorle named the representative hall of the municipal palace in honor of Hemingway, the writer who was called «the old fanatic of the Veneto».

In 2016 the musical notes of Irene Pauletto and Anna Possamai, young arpists of the Santa Cecilia Music School in Portogruaro (Venice), paid tribute to Ernest Hemingway on the anniversary of his birth, on the same day when the representative hall of the City of Caorle municipal palace was named in honor of the US writer. But the event had in store more emotions with the airing of an intercontinental phone call between Hemingway and his famous translator Fernando Pivano in 1957, thanks to the collaboration with Fondazione Benetton Studi and Ricerche, Fondazione Corriere della Sera and Michele Concina, Fernanda Pivano’s heir.

Emotions that arose when Mayor Luciano Striuli, talking about Vitale Onlus, the Papa Award creator and the festival dedicated to the American writer named “Hemingway, the Nobel in the Caorle Lagoon,” sparked the spotlight on the huge audience during the the entire week dedicated to Papa Award who was supported by the Veneto Region, the patronage of the Journalists Association of Veneto and had, as a media partner, the newspaper Il Gazzettino. 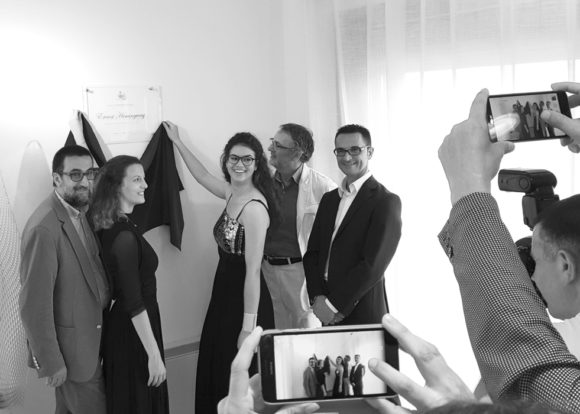 The journalism school of Papa Award develops, thanks to taught classes and exercises, the practices which characterise the profession of journalism in view of the main dynamics of information history. Starting from article-editing techniques, students analyse the different styles and types of journalistic writing and learn about the management of editorial companies and especially editorial journalism units.

Papa’s Journalism School, free of charge and dedicated to high school, university and journalism master students, takes place in Caorle during the week dedicated to the journalist-writer Ernest Hemingway. The classes include the introduction to the professional ethics of journalism, the course of the news and its value, which depends on source hierarchy and, thus, on information accuracy. One of the aims of Papa’s Journalism School is to develop different forms of journalism, passing through the interview, the investigation and the reportage, so as to provide students with an appropriate baggage of knowledge and skills needed to use the journalism tools of the trade.

One of the subjects addressed by information protagonists is “Journalism and New Media”, which analyses the communication system and explains the basic rules and the main styles of the newest form of journalism. Such knowledge is acquired through specific didactic devices, such as case history, essays, articles, detailed bibliography and practical exercises. The ability to put in practice the pre-existing knowledge and the study of new media techniques helps developing the writing and organisation skills that are necessary to write newspaper articles. Fake news are also taken into consideration through the description of a type of journalism which voluntarily spreads false information.

By the end of the week dedicated to Papa, the students of Papa’s Journalism School, on the basis of their theoretical, practical and linguistic knowledge, will develop the ability to analyse social media communication strategies.